Home » News » Flames out to burn the Warriors.

Flames out to burn the Warriors.

The Malawi National football team, the Flames return to action this evening as they play against the warriors of Zimbabwe at Bafoussam Omnisport stadium from 18:00 hours in the 2021 TotalEnergies African Cup of Nations.

The Flames face the Warriors coming from a 1-0 defeat to Guinea in the opening encounter, while Zimbabwe comes into the match after a 1-0 loss to the Teranga Lions of Senegal.

The game promises to be a tight encounter as both teams will be looking forward to register their first win at the tournament after putting up impressive performance in the opening games although both ended in defeats respectively.

Being neighbors also makes this match to be an intense encounter as the style of play is almost identical and  players form both teams have frequently faced each other be it in the COSAFA cup, CAF champions league or in the DSTV premiership in South Africa.

The Flames and the Warriors occupy the bottom spots in group B as both teams have no point, while Guinea and Senegal occupy the top spots as they are tied on three points after registering wins in their first games.

The Flames morale towards tonight’s game has been boosted with the return of key players who were not involved in the first game against Guinea due to Covid 19.

Only head of the Technical Panel Mario Marinica failed the test and is in isolation undergoing treatment. This means that assistant coach Meke Mwase will also take charge of tonight encounter just as he did against Guinea.

Meanwhile five players namely Gerald Phiri Jr, Stain Davie, Paul Ndlovu, Brighton Munthali and Dan Chimbalanga who were not on the 23-man squad to Cameroon have also joined the rest of the team in Cameroon to boost the squad.

While the morale in the flames camp is high, the warriors also have registered no Covid 19 case which means that both teams have full squads going into tonight’s game.

The other match today in group B involves the group leaders Guinea battling it out with Senegal at Bafoussam Omnisport stadium from 15:00 hours.

Elsewhere, games to be played today in group C include Morocco play against Comoros, while Gabon battle it out with Ghana. 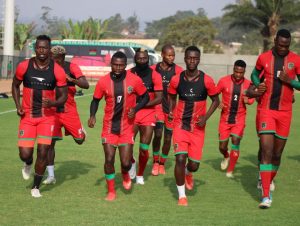