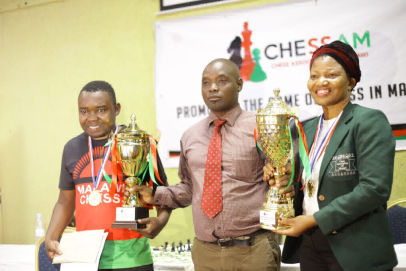 Namangale claimed gold medal at the expense of active players after she stayed twelve years without playing.

Mwale secured an impressive eight (8) points out of nine (9), winning all his games despite forfeiting his round 3 game due to miscommunication on rescheduling of the round.
He went away with MK250.000 cash plus a trophy. He has earned himself a ticket to play at the World Chess Olympiad in Russia 2020.

On the other hand, Namangale (the only female chess President in Africa) scooped 6.5 points out of 9, and received a trophy plus MK150.000 cash.

“I decided to play this tournament because I am not seeing adequate competition among ladies, hence i wanted to increase competition”, said Namangale.

The remaining four slots in both Open and Ladies categories will be filled when Top 16 Men and Top 10 Ladies compete in April.

This year’s championship had thirty (30) players in the Open section while Ladies section had fifteen (15) players.

Mr John Kaoche, the Principal Sports Officer in the Ministry of Sports, graced the event as the guest of honor.