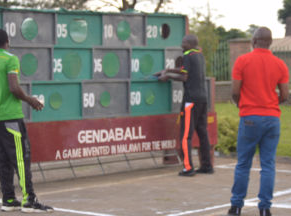 Malawi National Council of Sports (MNCS) has pledged to support the promotion of Gendaball in the country.

“This appears to be a very good game. We have been hearing about it and seen it in the newspapers. So we invited its officials to demonstrate to us how it is played. From what we have seen and experienced, this is a game that keeps people thinking and can go very far if well promoted,” Mereka said.

But he said there were some procedures to be followed before the game qualifies for support.

“Being a new sport, we need to pull all the things in place. For a game to be recognized and to be played across the country, we need to evaluate the rules and put technical officials in place,” Mereka said.

“Council of Sports is the supreme body that oversees all sporting codes in the country. We believe this exercise has helped them to know the sport better,” he said.

Kadyeremwana said they were setting up structures to meet Sports Council’s requirements to qualify for annual grants from the government.

Gendaball is played using a softball, slightly bigger than the cricket ball, which is thrown directly onto a target board comprising 16 holes of varying sizes and values.

The ball is thrown from a playing court made up of 10 throw stations.